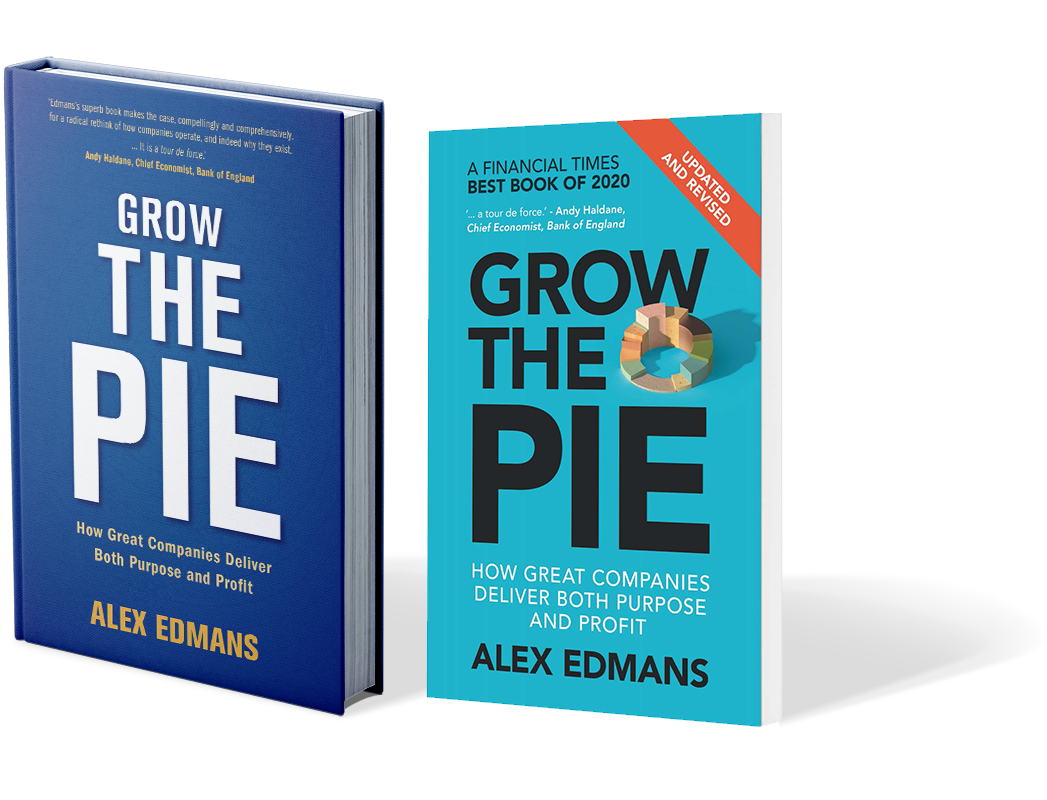 How Great Companies Deliver Both Purpose and Profit

CMI Management Books of the Year, 2020

Alex Edmans’ superb book makes the case, compellingly and comprehensively, for a radical rethink of how companies operate and indeed why they exist. It is a tour de force.

Edmans’s arguments are a powerful and persuasive antidote to much of the conventional wisdom about the corporate world.

This is a brilliant and timely book, taking the business case for responsible capitalism to a whole new level.

financier and founder of the 30% Club

This is a must-read book for anyone interested in reforming capitalism – particularly in its role of serving wider society. The book is grounded in academic evidence, but the ideas are highly practical, and recognize the need for business to be profitable as well as purposeful.

As someone who believes passionately in the power of business to contribute powerfully to the broader well-being of society, I’d thoroughly recommend this important, timely and evidence-rich book.

The implications are radical and far-reaching. Read it: it will challenge how you think.

His thought-provoking, often contrarian, ideas are rigorously logical, delving beneath the superficial analyses we often see, which assume correlation implies causation. And Alex’s engaging storytelling brings the principles of ‘Pieconomics’ to life.

This is capitalism with a human face.

Professor of Finance at the MIT Sloan School of Management

In this thoroughly readable book, Edmans debunks mythologies about corporate behavior and offers a new vocabulary by which we can have principled discussions about the role of business in society. A “must read” for leaders in government, business and the media that reports on both.

Director of GE, BP, and BAE

This book is a must-read for asset owners, fund managers and for the boards and executives who lead business enterprise. It provides evidence-based analysis and guidance on how the influence of well-designed stewardship can yield benefit in terms of both financial returns for savers and investors and returns for all stakeholders in a way that benefits society as a whole.

former Chairman of Barclays and Morgan Stanley International, author of the Walker Review

Alex Edmans has produced rigorous evidence that the choice between people and profits is a false dichotomy. Now he makes his work accessible to a broader audience and explains how it’s possible to overcome the tradeoffs that hold so many leaders and companies back.

former Chairman and CEO of Allergan

Edmans mobilizes evidence – not anecdotes – to make a case, both accessible and compelling, for policies and practices that increase the value available for all stakeholders versus simply and simplistically maximizing profit.

Alex Edmans provides robust evidence against the claim that businesses must choose between shareholder value and social responsibility.  Although there are trade-offs, there is no single trade-off. What is good for shareholders can be good for society: evidence matters.

Anyone interested in this important subject would find much to learn from, or wrestle with, in this book.

Alex Edmans is Professor of Finance at London Business School and Mercers’ School Memorial Professor of Business at Gresham College, where he gave a public lecture series on How Business Can Better Serve Society. He is a leading figure in the reform of capitalism to serve a social purpose, using rigorous evidence to both diagnose the problems and guide solutions. He gave the TED talk What to Trust in a Post-Truth World and the TEDx talk The Social Responsibility of Business with a combined 2.4 million views.

Alex’s research has been covered by the Wall Street Journal, Financial Times, New York Times, The Economist, and The Times, and he has been interviewed by Bloomberg, BBC, CNBC, CNN, ESPN, Fox, ITV, NPR, Reuters, Sky News, and Sky Sports.  Alex has spoken at the World Economic Forum in Davos and the launch event for the new UK Corporate Governance Code, testified in the UK Parliament, and presented to the World Bank Board of Directors as part of the Distinguished Speaker Series. Alex serves on the Steering Group of The Purposeful Company, which proposes policy reforms to encourage companies to pursue long-run purpose over short-run profit, and on Royal London Asset Management’s Responsible Investment Advisory Committee.

Alex is passionate about conveying complex technical concepts in simple language to a practitioner audience. At Wharton, Alex won 14 teaching awards in six years. At LBS, he won Best Teacher awards for both the MBA and Masters in Financial Analysis programmes and the Excellence in Teaching award for best professor across all programmes. He has been named to Poets and Quants Best 40 Professors Under 40 and Thinkers50 Radar.

New Prime Minister Liz Truss has made growing the pie a centrepiece of her economic policy: “For too long, the political debate has been dominated by how we distribute a limited economic pie. Instead, we need to grow the pie …

A reader (in fact, one that provided invaluable input into “Grow the Pie”) alerted me to the article “CEOs Are The Problem” by renowned MIT economist Daron Acemoglu. The article makes the following arguments: The current model of capitalism (shareholder …

Scientific Beta has just released a study claiming that there is “no evidence that ESG strategies outperform” after controlling for risk. Their research has been seen as paradigm-shifting since, previously, there was apparently clear evidence that ESG delivers alpha. Several …